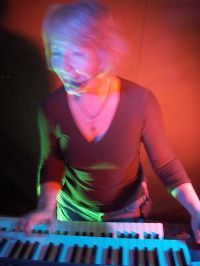 Chris (2003 – present) plays keyboards and provides backing vocals as well as some lead vocals for the band. Chris has played in bands around south-east Queensland since the 1980s and more recently in a trio before forming Kickstart in 2003 with guitarist, Hugh.

As well as providing backing and harmony vocals to Phil’s lead vocals, Chris covers numbers by artists such as the Divinyls, Tina Turner, Aretha Franklin, Rhianna, Martha and the Muffins, The Police and The Choirboys.

Chris’s keyboards give the band a versatility with a range of authentic sounds from the brass in songs like Superstition and Treat Her Right, the bagpipes in Copperhead Road, the flute in Land Down Under and synth in songs like Jump and Summer of 69.